I made a working Gameboy CSS art: try it out 🕹

Here is the story. Three years ago, I went to an interview (for an Angular position) and the interviewer asked me about a maze-solving algorithm. So I completed the algorithm and just for fun I went ahead and did an Angular project where you had to solve a maze (generating a maze is also a good exercise).

So, I had a fully working maze game on my laptop, and I also had a CSS art of a Gameboy 👉 I figured it would be fun to merge these two together.

There is a lot of algorithms for this. The one I went with is the recursive generation, for two reasons:

There are four steps in this algorithm:

This will go on and on until there's not enough room to make a division. Here is a gif with the full process of generation 👇

You can visualize the maze as a binary tree, each node represents a part / division of the maze.

For solving the maze I used the depth-first search algorithm. It's not the most performant algorithm for solving a maze but it gets the job done and it's fairly easy to implement. Also, I use it to go through the maze and find the longest path possible, then I use that as the exit point (goal location some might call it) of the maze. Here is a gif illustrating this algorithm:

I won't go deep into the details here, but tell me in the comments if you would be interested in a maze-solving article.

We are gonna talk about some CSS properties I wanted to highlight. We can divide these properties into two categories. Shape and Lightening (impression of light and shadows).

The first one is the good old border-radius. You might use it to make circles or ellipses. But this property can achieve more. You can specify the horizontal and vertical radius of each corner. Have a look at this snippet below:

I used this to shape the Gameboy plate and the black screen.

This property is very useful, it sets a preferred aspect ratio for the box, which will be used in the calculation of auto sizes. For example I can set the width and an aspect ratio, and the height will be calculated automatically. Have a look:

I used this on almost every element. Yeah I know I love this property!

You might use transform for rotations, scaling (resizing), or translation (moving), but you can also use it for distortion (skewing). The skew CSS property defines a transformation that skews an element on the 2D plane.

I use this for the sound holes grid. Have a look at the image below with skewing (right) and without (left):

There's also a rotation that is applied on the grid in both pictures. Also, for the sound grid, I used a grid layout. If you want to learn more about CSS grid I wrote an article where I explain every concept of it 👇

To give an impression of volume, lighting is essential. Look at the two examples below, left is without shadow and right is using shadows (text-shadow & box-shadow):

To achieve this effect of lighting we have to understand where to put light and where to put some shadow, and that depends on if something is in relief or depression. Have a look at the image below: 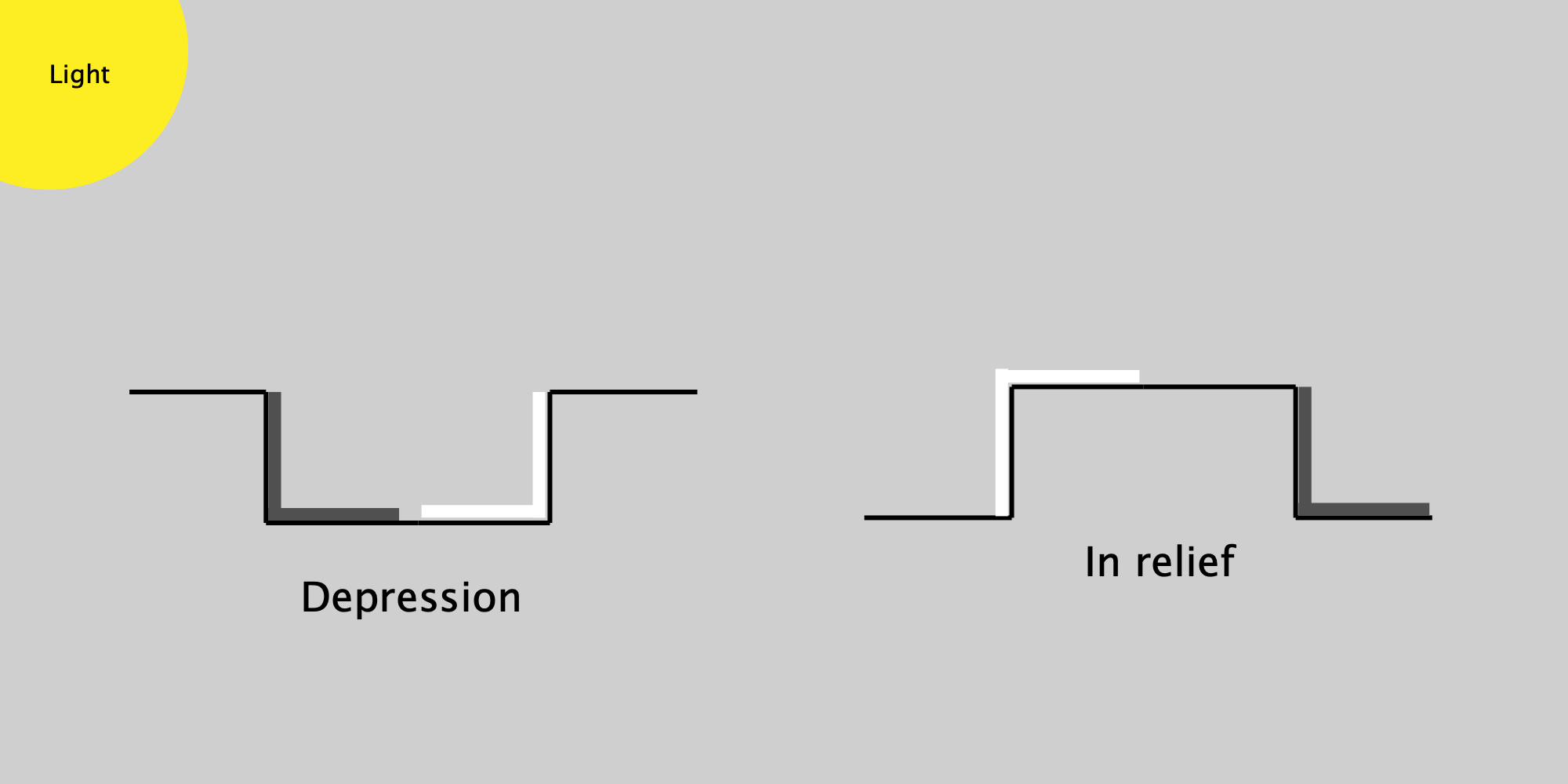 If we apply this to the buttons, we would have something like this (assuming the light is at the top left of the screen):

That translates to this code:

The inset keyword sets the shadow to go inside the frame.

Fo the texts we use the same principle either the text is in relief or depression. Here is an example of a text that is in relief: